A downloadable game for Windows, macOS, and Linux

Errant Heart is a Visual Novel game. It currently has a word count of approximately 120,000, which we estimate would yield somewhere between 3-8 hours of reading depending on your speed. It contains approximately two dozen event CGs, dozens of backgrounds by the talented Owen Carson, has had story editing provided by the insightful Lillian Diaz-Przybyl and is partially voiced with almost 800 lines of spoken dialog thanks to Apphia Yu.

Our cast consists of:

The general theme of the game is slice-of-life mixed with supernatural suspense.

Errant Heart takes place in a fictional 1940's European city (sans Hitler and Nazis) and follows the exploits of a young painter, Lira Moretti. As she leaves home in order to establish herself as an artist in the cosmopolitan mainland city of San Moritz, she has a bizarre encounter with a street urchin which leaves her with a gap in her memory.

As she settles in to life in San Moritz, Lira struggles to choose between starting her painting career or following up on the bizarre circumstances that she encountered upon her arrival. Eventually, after having apparently been followed by the street urchin, Salima draws Lira deeper into an extraordinary world where the passage of time takes on new meaning—a world which runs parallel but utterly unseen to the eyes of the banal.

We're a two-man-crew who, for the last decade, have been working under our studio name, Pseudomé Studio LLC. We've worked on animation projects, webcomics and print comics. If you want a succinct overview of our last project ( Van Von Hunter), you may want to consider checking out the Wiki.

First and foremost, we are ardent believers in good, robust story-telling and compelling, interesting characters. For the longest time we knew about the medium of Visual Novels, but we had always assumed that they were just vehicles for dating simulators—something in which we had little interest.

It wasn't until we happened across a title called Tsukihime that everything changed. It showed us that the format of Visual Novels could indeed be used as a means of robust story-telling. It could indeed contain interesting and compelling characters.

Of course, we followed and consumed as much Type-Moon content as we could in the intervening years—Kagetsu Tohya, Fate/stay night, Fate/Zero, Fate Extra, Fate/unlimited codes, Unlimited Blade Works, Kara no Kyoukai, etc. And along the way we came across other studios with a similar penchant for unique story telling through Visual Novels, like Nitro+ and titles such as Saya no Uta and Steins;Gate.

So that's a long-winded way of saying that Errant Heart was created in the tradition of Visual Novels from those sort of studios.

A secondary reason why you may be interested in playing Errant Heart has to do with the visuals. Something we dislike, but is incredibly common in Visual Novels is static artwork. Find a random visual novel title and find a Let's Play on YouTube. Now scrub the search bar and watch the little preview window. Does it take minutes-on-end for the imagery to change? I'll bet it does.

Given our background in comics and animation, we wanted to avoid that. So we've built Errant Heart in such a way that we hope it plays more like an animatic than a boring slide show.

Please feel free to check out our YouTube channel for sample videos.

And if you're so inclined, please leave a comment below, or consider visiting our subreddit to post about any issues you may have come across, any thoughts, criticisms or questions you might have in regards to Errant Heart.

A note about installation

Installation is straight forward. Simply select and download the version of the game which corresponds to the type of computer you use. Then, unzip/unpack the download to any location you like and run the .exe from the root directory.

In order to download this game you must purchase it at or above the minimum price of $5 USD. You will get access to the following files:

Really liked it, finished one of the endings only and im really looking up to the other ones and eventually the full release of the game!

I ... can... hardly believe this beautiful game is 'name your own price' - I think I read the description a few times over to make sure.

Okay.  Now this is where I'm a pain the a$$... is there a walkthrough in the works?  After I die (repeatedly) and end up with the same ending (repeatedly) - I get fruuustraaated...

Well, we did insert a hint system at each dead end. If invoked, "Professor Cassandra" should provide a suggestion about how you can get past a given "bad end". There's only one part in the game that, in our estimation, might be a little tricky. But, even if you have to back track quite a way in order to correct the issue, we also implemented a skip system which should let you skip past any scene you've already viewed.

That being said, we have considered making a Let's Play. Well, since it'd be from the creators, it'd be more like a Let's Play mixed with "director's commentary". But, not sure there's really enough interest to create such a thing.

I know that this a really late response, but that is such a great idea!!!!

Hello! I managed to finish at least a route of the game (one without dying and besides the Elena route, of course). And there's just a lot of things that I don't get. Well, given I finished one route (just yet)... I'll try a couple more later on. Anyway, the mystery's gnawing up on me and even in this one route, there are a couple of loose ends. I'm not sure if they're intentional (like, maybe we're supposed to finish all routes to get the whole picture?) but still! I felt compelled to voice these nonetheless, though preferably in a more private one? Lest other fans won't mind me spoiling a whole chunk in here? lol Do you guys have a general email for accepting questions and/or beta-reviews?

Anyway, that aside, the mystery of this game is really great, a first for me if I say so myself. Like I said, there were some loose ends but I suppose this ain't even near the final product? There were a few glitches here and there (like that park training part with Salima where the music is a bit glitchy or something) and some minor spelling errors: 'kneel' instead of 'kneal' at the factory scene with Salima (or was it the beach scene, I forgot). XDD I haven't checked the voice though, since I've muted it in the entire game, so I have no opinion in that area. Sorry. :<

That aside, the art was splendid, especially the backgrounds and the story-telling was nice. So far, I've enjoyed it very much! :D I'm saving right now (T^T) but I'm hoping when the final full game is up, I'd be able to buy it off and/ donate as much as I can to help you guys off. I can see that you really put great effort in completing this game after all. It was amazingly done and I'm very thankful of you guys for sharing this work to us, for free no less! :> I hope you keep this up and haven't given up on this project just yet.

Anyway, hoping to hear more from you soon. Good luck!

Thanks for the comments and glad you enjoyed the game.

As far as making spoiler-y comments, there are a number of choices. First, if you happen to use Reddit, you can make a post in our subreddit:

Just label the title as containing spoilers. This might be useful if other people who have played through the game have similar questions. Aside from that, you could always just email us: pseudome@pseudome.net.

And incidentally, yes—even by completing this version of the game, there are plenty of questions left to be answered in other paths. We figure that's the best way to compel readers to follow up with different branches...uh, assuming they ever get made. :P

Ohhh I geeet it noow! Actually, I just manage to find a couple more routes that are unfinished, particularly Karl's. So I think this really does fall under the 'complete all routes to understand the game better' category? I am so excited for this! Damn, huhuhuhu, so Karl does have a route! fufufu~ :>> OMG, made me all the more fired up. ESP THAT CUTESY LINE BEFORE THAT ROOFTOP SCENE. omo Imagine my shock, and even shock is an understatement, when Professor Cassandra showed up, saying I have to rewind because I fudging ended up in Karl's route! Yosh, I really am going to save as much as I can right now in order to help you guys. :>> Good luck on this, Pseudome! Really interesting plot line here. I hope you get the loose ends tied up soon. XDD

I was slightly disappointed when I reached a dead end at Elena's path. I liked her, such a pity. :P I do hope you guys do get the opportunity to further the game. I wish I could contribute, but sadly, I still have no means of doing that (at least, I don't, until I graduate, which is a relatively long time from now).

But, anyways, it's a great game so far! I love the art and the music, and the lit major in me is basking under the glory of the story. I do have a minor issue though, I can't save the game. I think the error is that there's no valid save location?

You know, it didn't occur to us until just recently that a lot of people would probably naturally gravitate towards the choice that would lead down Elena's path. Whoops! :P

As for not being able to save? I've not come across anyone with that issue yet. However, my suspicion is that you probably have the Windows version? And perhaps you unzipped it into a Windows 7/8/10 environment? If so, I'm betting that Windows made sure to keep the directories and files "read only"—which would prevent the game for writing any data (like a save game) to your disk. If that is the case, you may be able to get around the issue by changing the security properties of the Errant Heart directory to allow writing/modifying of files.

In any case, glad you've enjoyed the game thus far, and hope you enjoy the rest.

is this a kinetic vn?

Not in the strictest sense. There are some dead ends. There are some "stubs", which would lead to additional character branches (if we ever get the opportunity to make more), and there are some choices that alter the pacing of the existing branches. 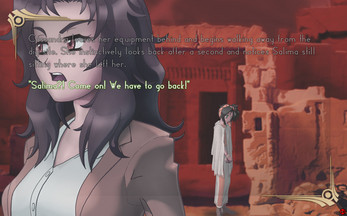 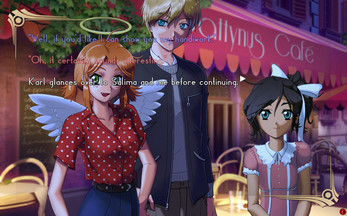 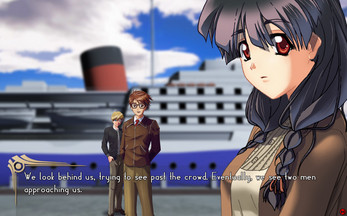 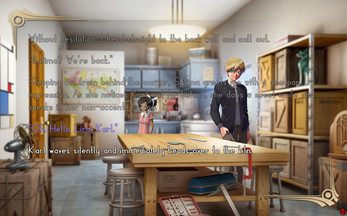 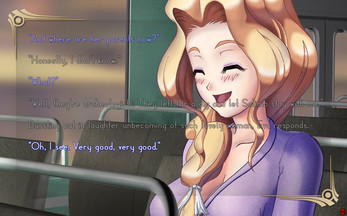 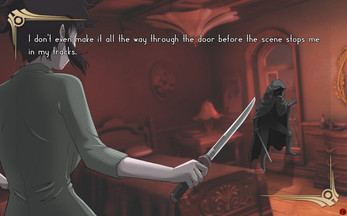 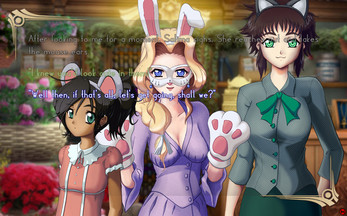 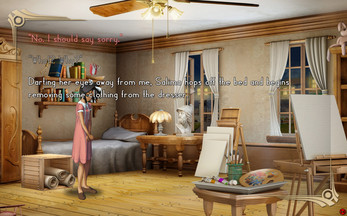 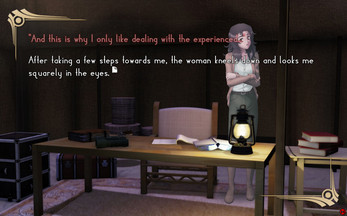 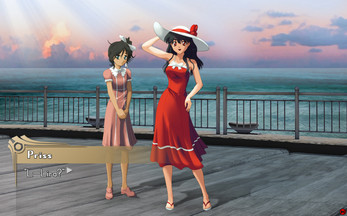